Masked as birds two performers live, observe and interact in the public urban space. The are looking for the “lost” places and objects/subjects within the accustomed flow of the everyday life. “Lost” in the sense that they are avoided or ignored, they were abandoned, “erased” on the Life Map. From their bird’s-eye view, the performers now direct the focus on these “invisible” features of the city to closely investigate these supposedly no-more-human left-behinds. Their actions disturb the fixed opinions and behaviours which are already included in our daily life: Without judging they receive whatever they find and put their hands exactly on these “untouchables” and depending on the matter and meaning of the place or subjects/objects found, they reconstruct the setting into an unfamiliar, de-ranged new Tableau Vivant. Following questions arise: What is it, that does not deserve attention (anymore)? Is there a link between the objects/subjects found and the place? What do those “lost” scenes tell us about the place, the inhabitants, the society as a whole? What occupies our environment? Who is responsible for this? Is this a reflexion of our mentality? How do we treat objects/subjects/places? How much does this differ from how we treat human

beings? Who or what rules our actions and thinking? Is that “Other” or “Strange” so untouchable? What do we actually know about them? Are they really so “different” from us that they do not fit in the social norm? How do those subjects/objects/places transform as soon as one smash the blinders and respect their values?

They remind the passers-by that those belong to the proper and real life. That all once was created with a specific reason and that there are those objects/subjects that for some reason are transformed into Outcasts.

One could perceive the Street Birds as special city guides: clearly distinguished from the ordinary life they appear with their costumes and manners as composite creatures, between human being and animal, between city and nature. They inhabit these “secret” places and in their equally composite language they communicate as messengers between those two worlds. Inventions, interactions, intentions, interrogations, interests are set out in the city for the immediate audience to let them participate in this “hidden” life right now and to let the echo’s start resonating after.

The actions are based upon following modules:

– Short Interventions of ca. 3 hours per place: clearly defined examination of the place to discover the special features of it and to find a relation with it.

– Longer Actions of 5 – 8 hours per place: to have time to let the place “speak” with us, to get into interacting with it and with its “inhabitants”.

– Longtime performances: to live for 3 – 5 days in a neighbourhood to be able to perceive longterm effects of the place, our presence and actions and thus our relation with it and its “inhabitants”.

Kinds of actions vary between:

– Exploring freely all what is found, regardless of our human conceptions and pre-conceptions.

– Collecting lost objects and present them at the site.

– Bringing life with our specific presence and actions at that “erased” place.

– Decomposing the found composition of the place to recompose it.

– Constructing structures or sculptures out of the found materials.

– Tuning-in with sounds and movements into the scenes.

All will be filmed and photographed to be able to construct an installation with the results. 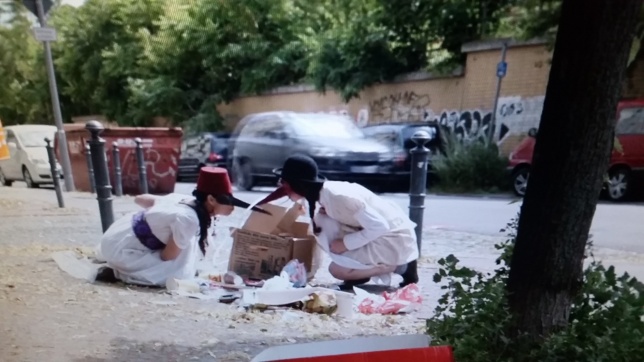 Scenic artist with over  20 years  of  experience  in  the scene covers many facets:  theater  and film actress, performer, teacher, director and theater coreographer.

As an actress she has participated in over 30 staging working with directors from Mexico, Poland and Germany.

Since 2003 she has worked as a teacher of acting and dramatic movement in some of the most serious institutions of the Mexican scene and has worked as a consultant to move in various productions, including the latest (2009 and 2012) for the National Theatre Company of Mexico.

In 2007 she is invited by the German group cosmofactory to play the Mexican painter Frida Kahlo in the play “Paula und Frida” directed by Oliver Peuker und Ute Falkenstein. This work was presented at the Theatersommer auf dem Barkenhoff Worpswede seasons in 2007 and 2008.

From 2008 is definitely left to live in Berlin Germany, starting personal projects that lead exploration and development of aesthetics and the search for personal scenic lenguaje.

Since my MA on Rhythm in Literature and Theatre at the University of Antwerp (Be) I am creating different kinds of structures in performance, exploring the wide possibilities of Rhythm. Rhythm to me is the great abstract linking element, connecting all kinds of marks in time. In this sense I am developing my proper performative “language” to “relate” especially mythological themes.

TRES, SOL-ÉTUDES and LET’S TALK ABOUT CLOUDS are works with the visual artist Igor Souza (Br). Questioning and delving into the cultural meeting points and gabs in Berlin, Salvador de Bahia as well as in Antwerp.

KILOFON is the Music Theatre Collective with which we created 2 productions. In both of them, music and objects were our main language: See:sucht and Ich hab’ das Dunkel noch im Ohr .

The DRUMMOBIL is another important side of my work. Here I pass this re-thinking of musical and performative languages on kids of the neighbourhood in Neukölln, Berlin and let them show this in return to the inhabitants through their performances on local festivals.

KAIARA, a coproduction with the Wood Quartet Sirius (Be), mixing the European Classical Music of Ravel (Contes de mère L’Oye) with Brazilian folk tales and stories.